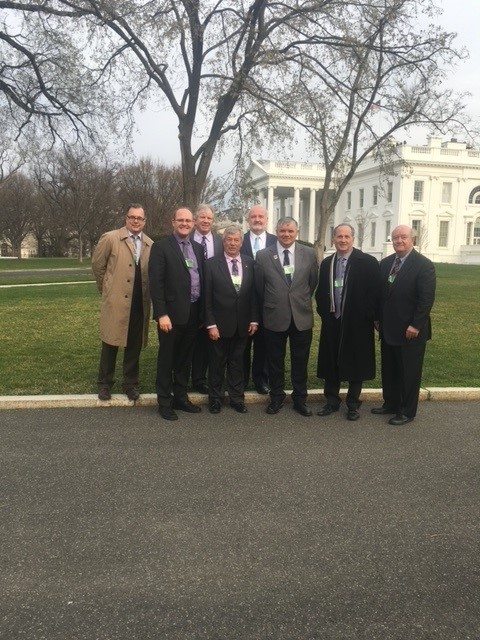 In August 1967, Representatives from the six state township organizations met to discuss banding together to improve visibility in the nation’s capital. This was not the first attempt at forming a national organization, however. In 1952, township officials from eight states got together for a national meeting, but nothing permanent developed.

This attempt was more successful. Troy Kost represented Illinois townships at the meeting, which established the National Associations of Towns and Township Officials (NATTO). The mission of the new organization was to further the interests of township officials and smaller communities. By the end of the year, a temporary office was opened and membership included representatives from Illinois, Michigan, New Jersey, New York, Ohio, Pennsylvania, and Wisconsin.

The new organization had two immediate goals—creation of a general revenue sharing program that would help smaller local governments and inclusion of a township official on the federal Advisory Commission of Intergovernmental Relations.

By 1970, Indiana, Maine and Minnesota had joined the national association. In 1972, NATTO had its first real victory when revenue sharing was established. Congress would now give an annual share of the federal tax revenue to states and their cities, counties, and townships.

Other highlights followed. Directors of the association met with Vice President Nelson Rockefeller at the White House to discuss renewal of revenue sharing. Members testified at hearings on Capitol Hill. President Gerald Ford invited NATTO representatives to attend a bill signing for revenue sharing renewal in 1976. NATTO membership lobbied to defeat in an effort to change requirements to exclude many townships from eligibility.

Although NATTO had provided some measurable successes, members began to realize that to be truly effective in Washington, the organization had to shift from a voluntary operation to a full-time, staffed presence with a permanent headquarters.

A meeting was called at O’Hare Airport near Chicago and was attended by 50 township officials from across the country. TOI Secretary Troy Kost and President George Miller attended, representing Illinois. At the meeting, a decision was made to open a headquarters in Washington and hire a full-time executive director. Officials present hired Barton D. Russell to lead the revised organization, now to be called the National Association of Towns and Townships (NATaT).

Issues the new organization would focus on included funding for roads and bridges, federal dollars for rural development programs, and sewer and water facilities.

In 1977, NATaT personnel met with White House staff to develop the first ever White House policy on rural development. They also met with the White House chief advisor on domestic policy regarding national urban policy and how it could adversely affect smaller communities.

In late 1978, NATaT helped form a national advisory council comprised of members of corporations, foundations, and universities. The council was designed to further develop the association’s goals and objectives.

1980 saw Congress approve the national Rural Development Policy Act, following up on many of NATaT’s recommendations. General revenue sharing was also renewed. NATaT held its first annual conference in Washington, D.C., with the theme “Bridging the Gap.” The conference, attended by hundreds of officials from smaller communities, raised the visibility of the national organization.

In 1981, board members met with President Ronald Reagan, Agriculture Secretary John Block, and Housing and Urban Development Secretary Samuel Pierce on issues of importance to townships. President Reagan invited NATaT leaders to the White House to thank them for their support of his economic recovery program. At NATaT’s annual conference that year, Vice President George Bush and four cabinet heads spoke to attendees.

For the next two decades, as the text documents, NATaT was active in the promotion of township issues and concerns. Township officials from across the nation had had direct access to the White House and NATaT officials developed close relations with Presidents Reagan, George Bush, and George W. Bush.

Today, as NATaT soon enters its fifth decade, the organization continues to inform and educate federal officials about township government and the needs of smaller governments. NATaT represents 11,500 towns and townships across the country in areas of federal statutory, regulatory, fund, and policy decisions. In 2006, the NATaT Board of Directors identified three pressing goals for the organization: ensuring that towns and townships receive their fair share of federal funding, protecting the role of local governments in new telecommunications legislation, and increasing funding for local first responders.